An Early Historicist Interpretation of Revelation

The first four seals (Rev. 6:1-8) cover the time from which John writes (96 A.D.) to the end of Trajan’s reign (117). The horsemen represent a swift power that brings (1) a flourishing state (white), (2) bloodshed (red), (3) scarcity of provisions (black), and (4) public calamities (pale). The first horseman is a conqueror (conquers in the East); the second is a warrior (wars in the West); the third controls the production of the land (food crisis in the South); the fourth is death (enormous lost of life).

The first seal, the white horse (Rev. 6:1-2), represents conquest. This seal covers the reign of Trajan (98-117). It describes the conquest of the East.

The second seal, the red horse (Rev. 6:3-4), covers the years following Vespasian’s dedication of a temple of peace in 75. These years are filled with wars in the western portion of the Empire. Peace is taken from the world with Trajan’s ascension to the throne.

The fourth seal, the pale horse (Rev. 6:7-8), refers to the large lost of life during Trajan’s reign. During his reign, perhaps a fourth of the inhabitants of the Roman Empire die of war, famine, pestilence, natural disasters, and wild beasts.

Events on earth and in heavens are described in the fifth, sixth, and seventh seals. Thus, they refer to the invisible and visible. The fifth seal (Rev. 6:9-11) refers to happy death. It depicts the martyrdom of Christians at the hands of Rome. This seal pertains to Pagan Rome and Papal Rome persecuting and killing Christian. It covers from Trajan’s persecution beginning in 98 to the first crusade against the Waldenses in 1209 (a “time” or 1111 years).

The sixth seal (Rev. 6:12-17) refers to unhappy death. It shows God’s judgment of the wicked dead.

The first trumpet (Rev. 8:7) depicts conflicts and wars between Rome and the Jews during the first century. God sends vengeance against the Jewish enemies of Christ’s Kingdom.

The third trumpet (Rev. 8:10-11) pertains to the African part of the Roman Empire, primarily Egypt, during the third century. It depicts the rise of Arianism and the conflicts and wars between the Arian Christians and non-Arian Christian. Arius is the “great star” in verse 10.

The fourth trumpet (Rev. 8:12) describes the barbarian invasions of the fourth century and the breakup of the Roman Empire following the death of Theodosius. In 476, Odoacer captures Rome and disposes the emperor. Thus, ends the Roman Empire.

Accompanying each of the next three trumpets is a prelude. A prelude comes before each woe. For the first woe, the prelude begins in Persia (now called Iran) in 454 when Isadegard II seeks to abolish the Jewish Sabbath and continues with Phiruz’s persecution of the Jews in 474.

The fifth trumpet, first woe (Rev. 9:1-12) takes place between 510 and 589. This woe begins with a holy angel (“a star falls from heaven”) opening the bottomless pit. “Locusts” are the Persians, who zealously push their false idolatrous doctrine. These verses depict the Persian persecution of Jews during the sixth century. Persecution lasts 79 years, i.e., five prophetic months (“tormented five months”).

For the second woe, the prelude is the rise of the Saracens, Islamic Arabs. This prelude falls between 589 and 634.

The sixth trumpet, second woe (Rev. 9:13-21) takes place between 634 and 840. This woe begins with the loosing of “the four angels which are bound in the great river Euphrates.” These verses describe the rise and expansion of Islam, which bloodshed accompanies. Corresponding with the four angels are Islam’s first and most eminent caliphs: Ali, Abu Bekr (Abubeker), Omar, and Osman. In verse 15, the prophetic hour, day, month, and year equal 212 years. These 212 years begin with the ending of Abu Bekr’s reign in 634 and end with Leo IV’s repulse of the Muslims at Rome in 847.

In Revelation 10:6, “time no more” refers to a period slightly less than a chronos. A chronos is a whole time or 1111 years. This period begins in 800 when Charlemagne begins a new line of emperors in the West. It ends in 1836. Contained within this period are the “short time” of the third woe, the “three times and a half” of the woman in the wilderness, and the duration of the beast.

For the third woe, the prelude covers 840 to 947. During this era, Innocent I and his successors strive to expand their episcopal jurisdiction beyond all bounds and to expand greatly their temporal power.

The seventh trumpet, third woe (Rev. 11:19) takes place between 947 and 1836. It begins with the dragon, Satan, being cast out of heaven. This trumpet contains the seven vials. In heaven, the seventh trumpet is celebrated with great joy. On earth it heralds dreadful events until Christ comes and establishes his Kingdom.

In Revelation 12:12, “a short time” is probably about four-fifth of chronos or 888 years. Therefore, the “little time” begins with Satan coming to earth in 947 after being cast out of heaven and lasts until 1836. Shortly after 864 begins the war in heaven in Revelation 12:7.

In Revelation 12:14, “a time, and times, and half a time” is 777 years. It begins in 1058 after which Christianity is soon brought to the parts of Europe that are still pagan. It ends 777 years later or 1836. The “time” is when “the earth helped the woman,” and runs from 1058 to 1208. During this period, the Turks are powerful, but the emperors check their movements northward. Consequently, they protect the woman, i.e., the Church from the Turks. The “two times” is from 1280 to 1725. During this time Turkish power expands. Again the rulers of Europe, “earth,” helped the woman by repulsing Turkish advancement northward. The “half time” covers 1725 to 1836. Now the Turks focus on Persia and become less involved with Christendom.

Chapter 13 pertains to the Papacy. “Wild beast” is the Papacy. “The sea” is Europe. In 1077, the beast comes “out of the sea.” That is when Pope Gregory VII claims authority over all Christian rulers. The mark of the beast and the number of the beast, 666, refer to the Pope.

Wesley gives no time frame or events specifically associated with the first four vials. From Wesley’s perspective, all the vials are poured out in the future. They come quickly. The first (Rev. 16:2) affects the land; the second (Rev. 16:3), the sea; the third (Rev. 16:4-7), rivers; the fourth (Rev. 16:8-9), the sun. They begin at the end of the 42 months in 1810. These four vials primarily affect that part of the world under the Papacy. 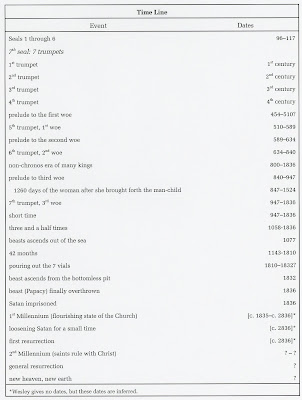 More articles on religion.
Posted by tc allen at 6:18 AM No comments: