In his article, “FDR’s 1933 Gold Confiscation was a Bailout of the Federal Reserve Bank,” Mr. Daniel Carr argues that President Roosevelt stole the people’s gold primarily to bailout the Federal Reserve Banks. His article can be found at http://www.moonlightmint.com/bailout.htm. In presenting his argument, Mr. Carr makes some questionable assumptions. This article discusses errors in Mr. Carr’s article. Otherwise, Mr. Carr presents a good terse description of events leading up to the Great Depression and the cause of the Great Depression. 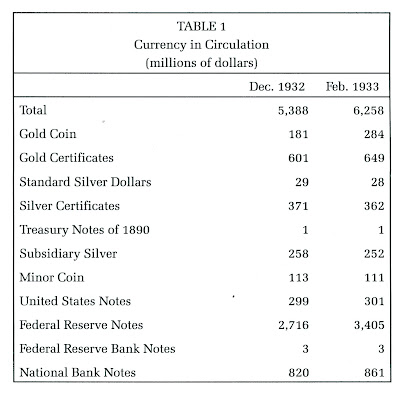 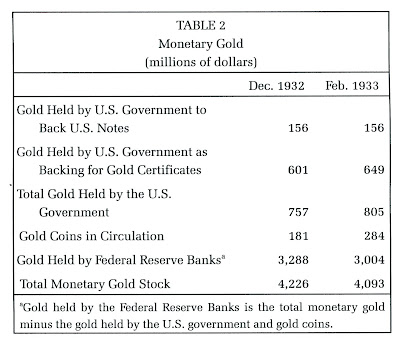 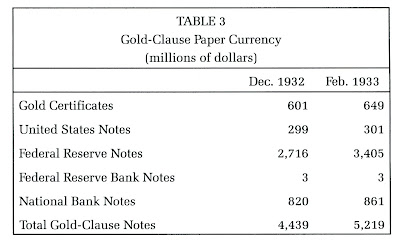 Although they were not gold-clause notes, the Gold Standard Act of 1900, which firmly placed it United States on the monometallic gold standard, made Treasury notes of 1890, silver dollars, silver certificates, and subsidiary silver redeemable in gold.

For purposes of comparisons with Mr. Carr, the data for February 1933 are used except where February 1933 data are not available. Then December 1932 is used. February was the last full month before Roosevelt took office. He executed his great gold theft in March 1933.

Mr. Carr estimates the quantity of gold-clause federal reserve notes in circulation in 1933 to be between $13,292 million (20,000 metric tons) and $26,916 million (40,500 metric tons). (He uses metric tons to weigh gold instead of dollars. At this time, a dollar was the weight of 23.22 grains of fine gold.) He uses The Standard Handbook of United States Paper Money by Chuck O’Donnell and The Comprehensive Catalog of U.S. Paper Money by Gene Hessler along with some assumptions that he explains to derive these numbers. As shown in the tables above, his estimate far exceeds the estimates of the Federal Reserve. Mr. Carr’s estimate for federal reserve notes in circulation is 3.9 to 7.9 times greater than the Federal Reserve’s estimate of $3,405 million. His estimate is 2.5 to 5.2 times greater than all gold-clause currency in circulation.

Mr. Carr estimates that between $13,292 million and $26,916 million in federal reserve notes were unbacked. He is correct in that the Federal Reserve lack enough gold to redeem all its notes. However, the shortage was not nearly as great as he estimates. Nevertheless, the situation was as dire as he declares.

Most loans were in the form of demand deposits instead of paper money or coin. Funds in demand deposit accounts were available to the holder on demand and had to be redeemed in gold if so demanded. As the typical bank was using $1 in gold to back several dollars in demand deposits (it was allowing multiple parties to use the same gold simultaneously), it could not redeem all its deposits if a bank run occurred as happened in the early 1930s.

These statistics show that commercial banks that were members of the Federal Reserve System had $2,509 million in reserves plus $423 million in vault cash or $2,932 million that could be used to redeem $15,193 in checkbook money. Thus, on December 31, 1932, the Federal Reserve System held $3,288 million in gold to back $15,193 in demand deposits and $2,716 million in federal reserve notes. It was short $14,621 million in gold. Moreover, commercial banks were liable for $820 million in gold for redemption of national bank notes, which an equivalent amount of U.S. government bonds held by the U.S. Treasury secured. The problem was not too many unbacked federal reserve notes. It was too much unbacked checkbook money. This shortage of $14,621 million, plus an additional $820 million for national bank notes, falls within Mr. Carr’s estimate of $13,292 million to $26, 916 million.

The above shows that the U.S. government held $805 million in gold to back gold certificates and U.S. notes. The Federal Reserve held $3,004 million in gold. Of the $4,093 million of the monetary gold, the U.S. government and Federal Reserve held 93 percent. The people held $284 million in gold coins or about 7 percent of the monetary gold. If the coins were roughly evenly distributed among the population, each person would have had between $2 and $3 in gold coins (c. 123 million population).

As Roosevelt confiscation order allowed each person to keep $100 in gold coins, he did not have to steal any coins held by the public. Between the Treasury and the Federal Reserve, he already had nearly all the gold. All he needed to do, and what he did do, was to violate the U.S. government’s, the Federal Reserve’s, and national banks’ contracts with the people by voiding the redemption clauses in the law and on the paper money.

Bailing out the Federal Reserve was not the primary reason that Roosevelt stole the people’s gold as Mr. Carr asserts. The primary reason was control. Roosevelt wanted to establish a fascist government. Gold prevented him from doing that. Gold protects the people from despotic governments and their central bank co-conspirators. Once he had stolen the people’s gold and outlawed their using it as money, he proceeded to convert the United States into a fascist state.

However, Roosevelt did greatly aid the bankers to do what bankers like to do most — inflate. He did this in three ways. First, he stole the gold that the people had entrusted to the U.S. government and let the Federal Reserve use it as part of its official reserves. Second, he redefined the dollar from 23.22 grains of gold to 13.71 grains, i.e., he devalued the dollar about 41 percent. Third, and most important, he removed the restraint of gold redemption.

Mr. Carr is correct in identifying bank money as a major problem that led, at least in part, to Roosevelt’s theft of the people’s gold. However, he focuses on bank notes, federal reserve notes, instead of checkbook money. The latter was much more significant as it was 5.6 times greater than federal reserve notes in circulation.

Perhaps Mr. Carr or someone else may be able to sift through the voluminous data in Banking and Monetary Statistics, 1914-1941 and derive more accurate conclusions than I have.

More articles on money.
Posted by tc allen at 7:28 AM No comments: