Review of Segregation and Desegregation -- Part 1

[Editor's note: Some of the endnotes have been replaced with links.]

More articles on social issues.
Posted by tc allen at 10:42 AM No comments:

Of One Blood
Thomas Allen

Proponents of the unity-of-man doctrine who use the Bible to support their doctrine like to quote the first part of Acts 17:26: “And hath made of one blood all nations of men for to dwell on all the face of the earth. . . .” Therefore, they conclude that all humans have a common origin. They imply, if not outright claim, that the blood of the races of humans is identical. Thus, races cannot be distinguished by blood.
Most modern scholars doubt that the Greek text used by the translators of the King James Version of the Bible, for this verse was a copy of the original. The best Greek texts do not contain the word “blood.” The word “blood” appears mainly in later Western manuscripts as an interpolation. Most likely, “one” in Acts 17:26 refers to God, who is the maker of all nations of humans.
Even if the word “blood” is in the original, this verse does not show that all humans descended from Adam. It merely shows that God made each race of humans.
Whatever blood means in this verse, it does not mean blood flowing through the veins. As shown below, the frequency of genes, alleles, antibodies, and proteins in the blood of the races of humans varies significantly.
The blood of the races varies at least statistically. The percentage of the population of the several races having certain blood groups varies enough so that the race of a population, if not of a particular individual, can often be identified based on blood analysis. Further, a person’s blood can often eliminate him as a member of a particular race. 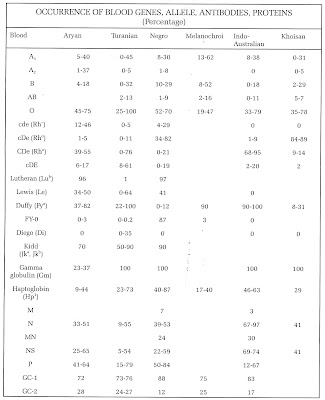 14. Herbert Wendt, It Begin in Babel: The Story of the Birth and Development of Races and Peoples, trans. James Kirkup (Boston, Massachusetts: Houghton Mifflin Company, 1961), p. 374.

15. See the works of Luigi Lucia Cavalli-Sforza — especially The Great Human Diaspora: The History of Diversity and Evolution (1995) and The History and Geography of Human Genes (1994). Officially, he takes the politically correct position of racial equality and the unity of man. Also, see Species of Men: A Polygenetic Hypothesis (1999) by Thomas C. Allen for a polygenetic position.

More articles on anthropology.
Posted by tc allen at 9:51 AM No comments: