Miscegenation Is Not a Personal Matter

Miscegenation Is Not a Personal Matter
Thomas Allen


If it be treason to advocate the overthrow of the government of a people, it follows, as truly as the fact that the whole is greater than any of its parts, that to advocate the destruction of the people themselves is the highest kind of treason.[2]

Thus, anyone who contrives in anyway to integrate a person of one race into another race is guilty of the highest form of treason. Not only does he advocate the destruction of this race in a particular country, but he also advocates the destruction of that entire race globally.
Each race has a duty to undertake actions to preserve itself. Geographical separation is the most effective way. When that is not practical, segregation becomes the most effective. Segregation is nothing more than each race building a fence around itself to protect itself from the other races.
Few people would deny a farmer the right to erect a fence between his diary cattle and beef cattle to prevent their interbreeding. Are not the races of men more valuable than breeds of cattle? If they are, should not people undertake erecting barriers between the races of men to prevent their interbreeding? Only a traitor would answer the last questions in the negative.
People who want to allow interracial mating need to explain their hatred. Why do they hate the races involved so much that they willingly allow them to breed each other out of existence? Only hate could be behind such desire.
Prohibition of miscegenation and the erection of barriers, segregation, that preserve each race do not deprive anyone of his rights. If they do, then erecting barriers to prevent treason also denies everyone his rights.
To the contrary, segregation and the prohibition of miscegenation are based on one of the soundest principle known. That principle is that no one has the right to do things that destroy the property of another. Each race has its own unique set of physical, physiological, and psychological traits. Each has its own unique set of biological, anatomical, and morphological traits. Interracial marriage results in people of one race trying to steal or destroy the unique traits of another race. Therefore, each race has a duty to prevent this thief and destruction.
Equal rights only exist where all have an equal legitimate interest. No person has equal rights in a house owned entirely by another. A person of one country does not have equal rights with the people of another country. He cannot vote, hold elective office, etc. Likewise, people of one race do not have equal rights with people of another race because each race has its own unique racial characteristics. They have no legitimate interest in any race other than their own. To claim that people of one race have a right to mix and mingle with another race is tantamount to giving people the right to enter and use the house of another without the owner’s permission.
The sum of racial traits of a race belongs to that race and to no other race. They are the property of that race by birth and of that race only. Being born with these racial traits gives that person a legitimate interest and right in his race and in all matters that might affect his race. Where no legitimate interest exists, no rights exist.
No person has equal right in things where he does not have an equal legitimate interest. No person can be given rights in things where he has no legitimate interest. He can be given the privilege, but not the right, in things where he has no legitimate interest. Therefore, miscegenation is a privilege and not a right.
Moreover, privileges usually violate liberty. Liberty exists where all men have equal rights in things where they have a legitimate interest and where no man has a right (privilege) in things where he has no legitimate interest.  (For example, liberty exists where every homeowner has the right to use his house, but does not have the right to use someone else’s house.) Thus, miscegenation violates liberty.
The open-borders policy is the result of the U.S. government forcing, instead of preventing, the mixing and mingling of the races. Thus, the open-borders policy is a violation of equal rights. It gives people a right (privileges) in what is not legitimately theirs, i.e., it gives them rights in another’s country.
People who oppose prohibiting miscegenation should also support an open-border-unlimited-immigration policy. At least liberals and most libertarians and even some “conservatives” are consistent in supporting both miscegenation and open borders. However, when their own house is being violated, nearly all of them act inconsistently. They oppose people who have no legitimate interest in their houses acting as though they do. This is proof that they care nothing about their country or their race, or any other race for that matter. A consistent, rational person would favor policies that protect his race, country, and home and oppose policies that destroy them.
Integration is a violation of equal rights. It gives people of one race a right in what is not legitimately theirs, i.e., it gives them the rights to the property of another race.
About rights, O.R. Williams writes:

One of the greatest lies since the serpent deceived Eve is that if two people of different races marry, that marriage is no one else’s business. Such a marriage is not an individual matter between the two individual members. It is a matter of everyone in each race involved.
When someone does something that affects only himself, it is an individual matter. When someone does something that affects himself and others, it becomes a matter of the others affected. Interracial mating affects more than the two people involved. It affects their races. Each race is like an individual; thus, when two people of the same race marry, that marriage is an individual matter — both personally and racially. Such marriage does not lead to the destruction of that or any other race. However, when people of different races marry, it is more than an individual matter. It is even more than individual racial matter. A racially mixed marriage is a concern of every one of the two races involved because it leads to the destruction of both races. Interracial mating is a concern of every one of the races involved because they result in the amalgamation and mongrelization of the races involved. It destroys the common property of each race; that is, it destroys the unique racial traits of each race.
To argue otherwise is to claim that traitors have the right to aid in the destruction of their country. Moreover, treason is a personal matter and should not be prohibited or punished. The only difference between race and country is that one is biological and the other is geographical.
Writing at a time when some States cared enough about the races to prevent their self-destruction, Archibald Coody writes:


The law forbids the marriage of negroes and white persons, and provides that such marriages are void, which is certainly not discrimination. If either race feels humiliated or offended at this separation, it thereby confesses its sense of inferiority.[4]

Unfortunately, these laws have been stricken and removed.
Not only does interracial mating lead to the destruction of the races, it is also detrimental to the offspring. Coody summaries this detrimental effect of striving for social equality and the resulting miscegenation:


In a marriage of black and white, upon whose past, do we build? Sleswick or the Congo?  Of what history would the child be proud? To whom would homage be paid? To what ideals would its allegiance be given? A marriage between white persons, one an American and one, say a German, poses a problem of loyalty. The child has two great traditions of culture and achievement, but it must and will believe in one more than in the other. But it is a problem only of present and surface emotions and psychology. The problem of the mulatto is infinitely greater because he combines two diverse and irreconcilable traditions. Loyalty to one means repudiation of the other. He is at home with neither the white nor the black. Unable to be true to either parent, he cannot be true to self. These and other conditions needless to mention, are sufficient to show the utter futility of any plan of social equality. For social equality is worse than a farce if we draw the line at marriage — it ceases to have meaning.[5]

Most of these mulattoes end up being what the great civil rights leader Roy Innis calls “house niggers”:

Each race needs to respect the rights and property of all other races. Each race needs to support and undertake actions to protect and preserve the rights and the unique properties of all races. The most effective policies known to achieve this goal are separation and prohibition of miscegenation.
All need to remember the words of wisdom given by Innis:

Miscegenation is the highest form of integration.

More articles on social issues.
Posted by tc allen at 6:23 AM No comments:

Either we must admit different species in the genus Homo, or we must entirely reform zoological classification. – George Pouchet


The following tables show the major branches, racial types, and representative nationalities or people of the several extant species of men. 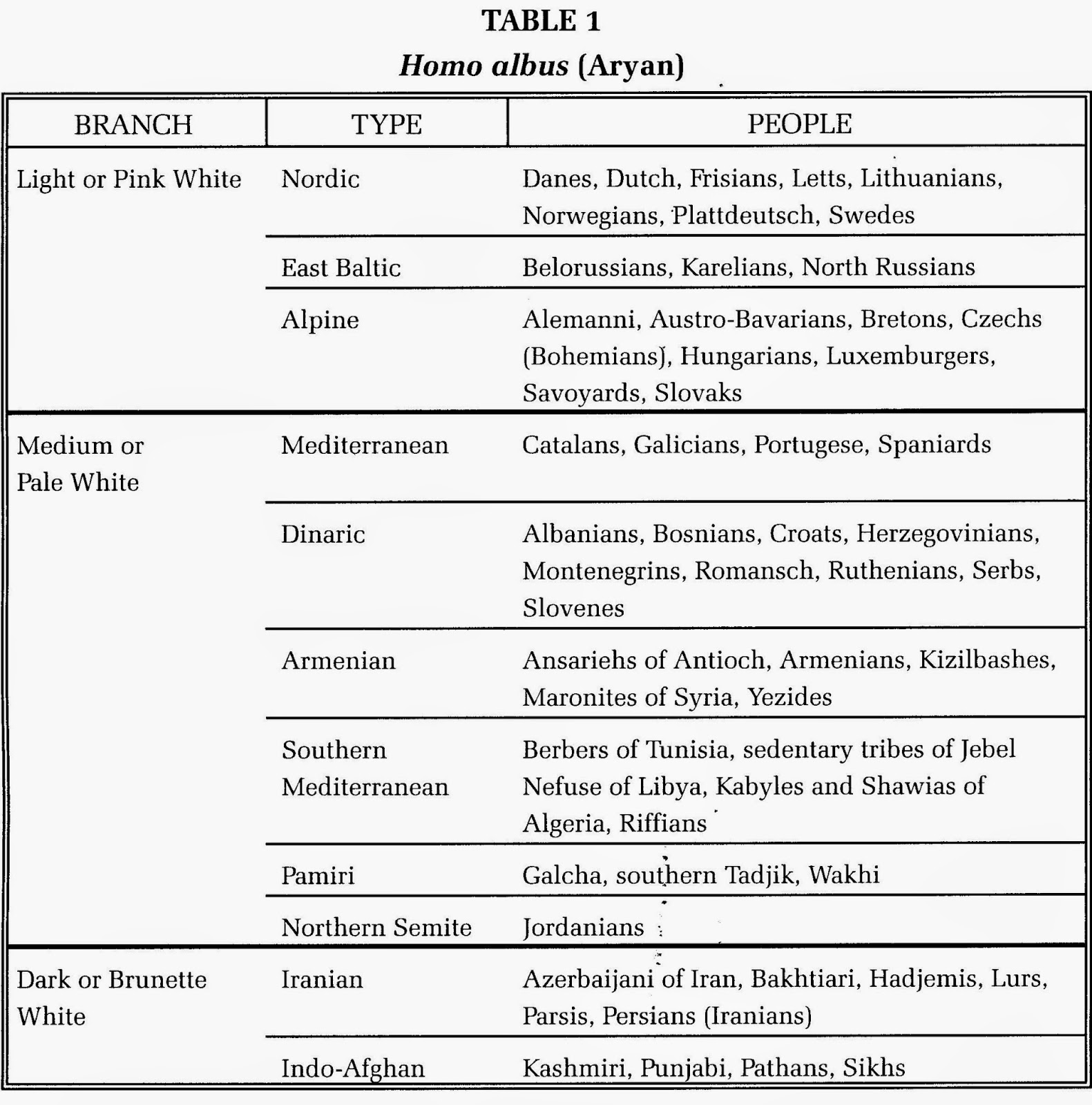 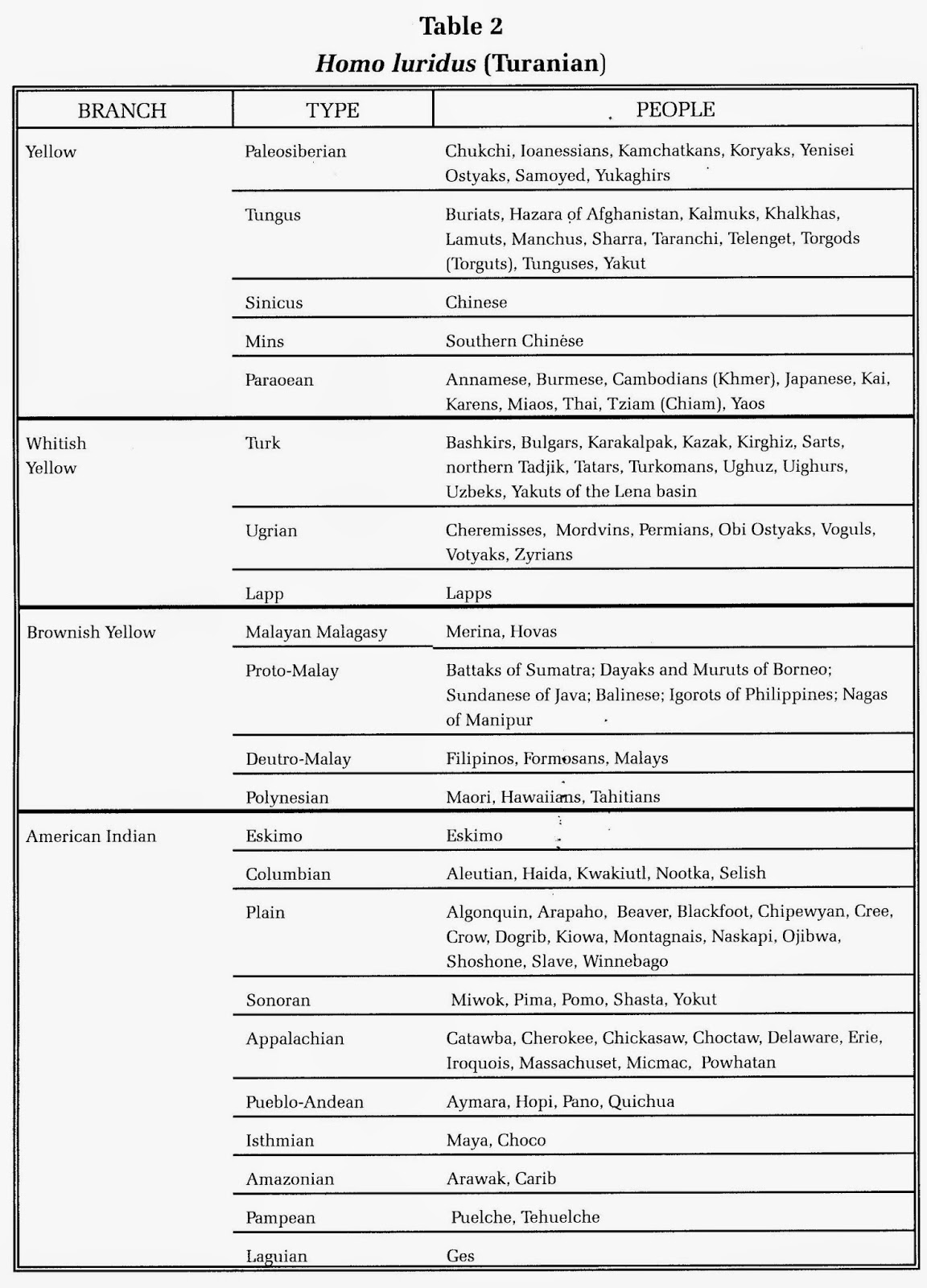 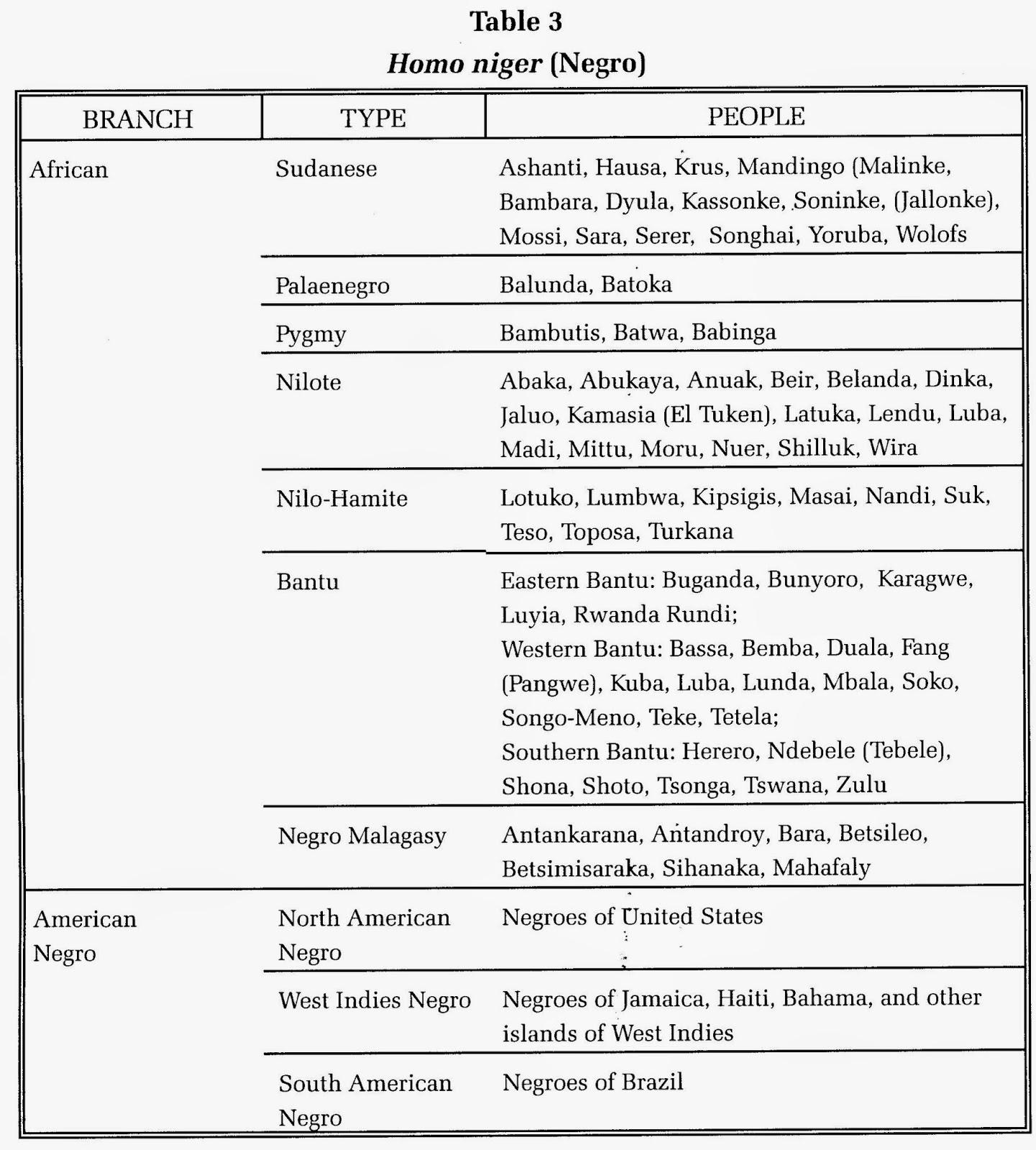 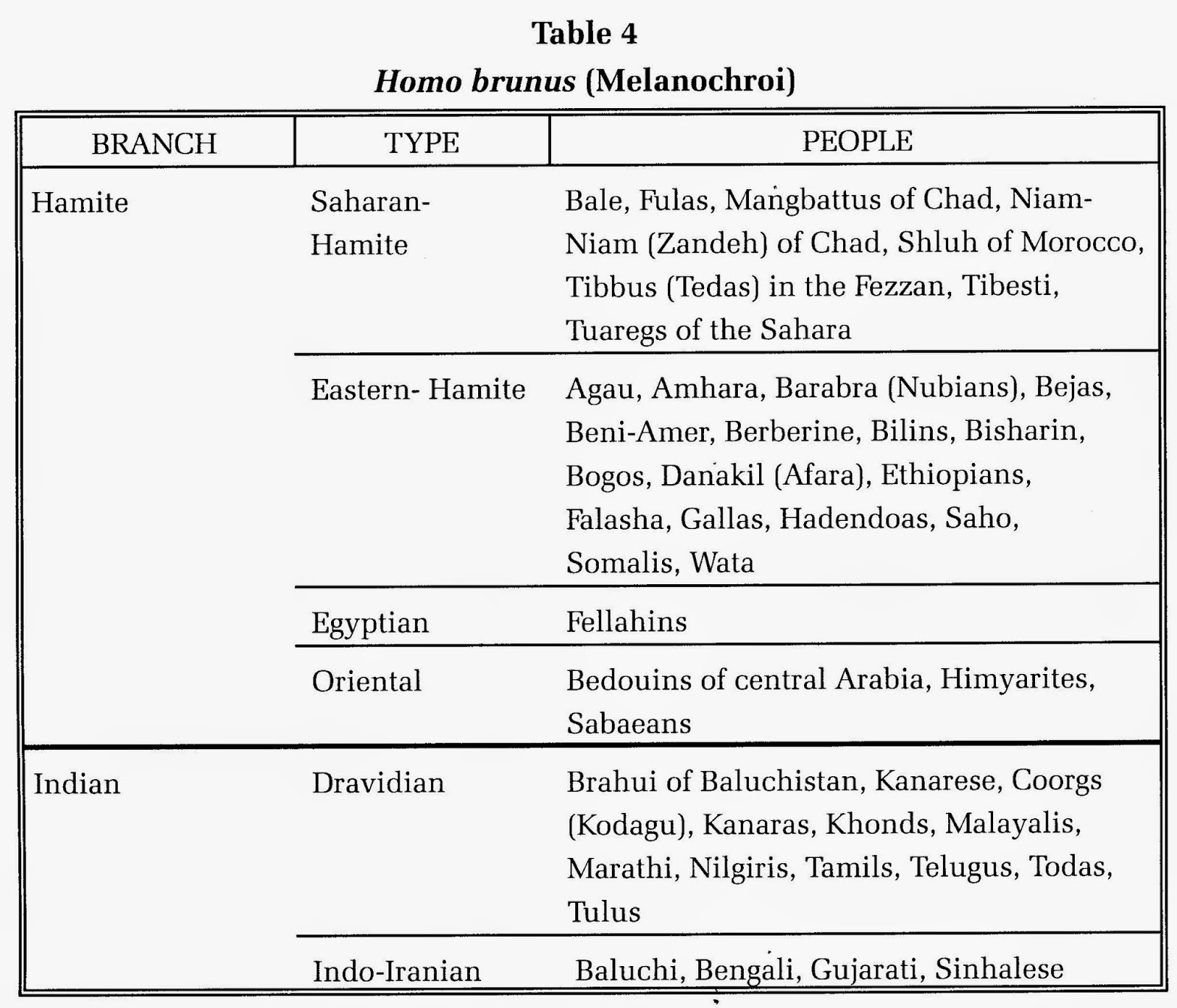 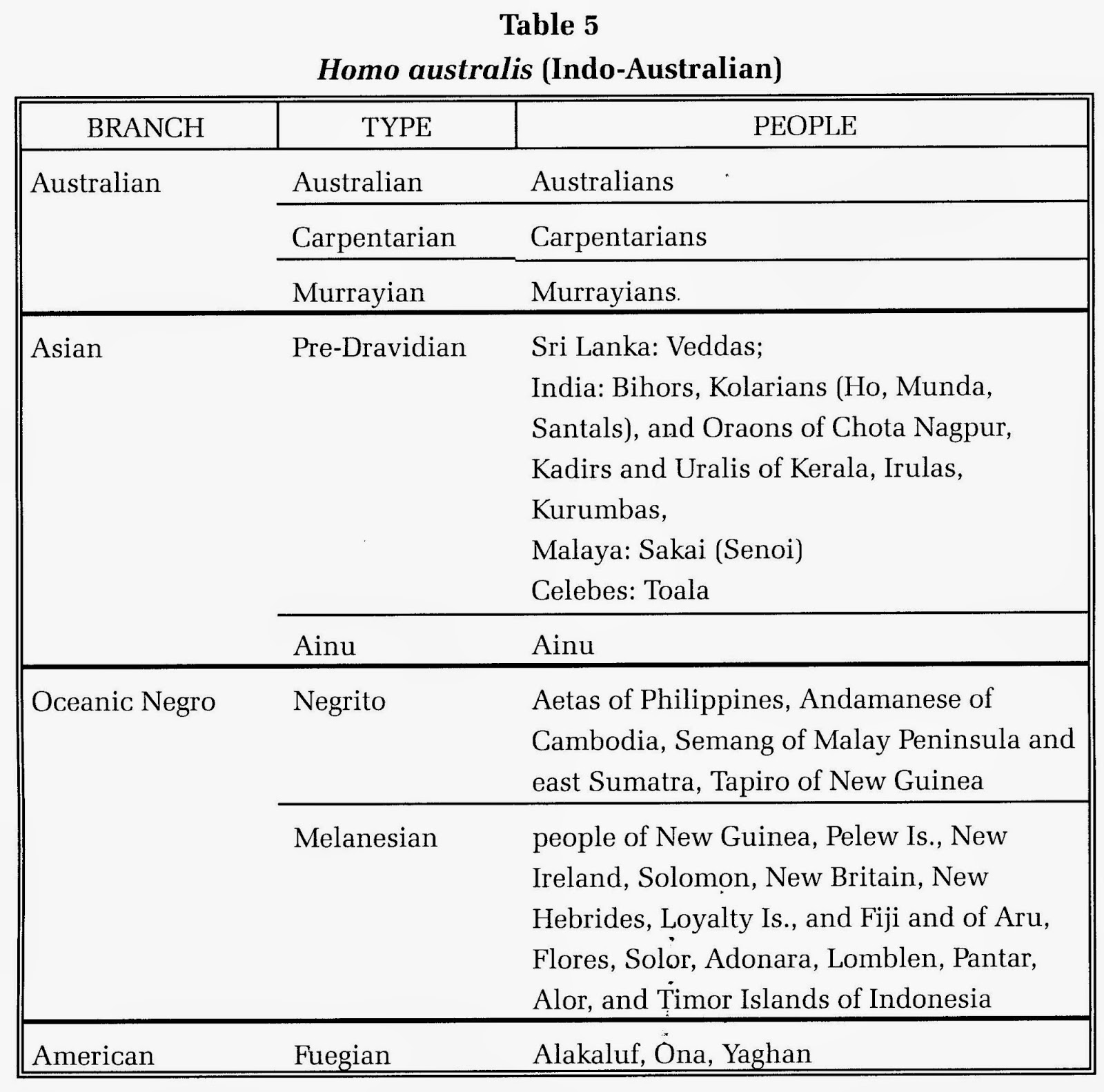 For a detailed description of these species and racial types, see Species of Men: A Polygenetic Hypothesis by Thomas Coley Allen and "The American Indian" and "Indo-Australian."

More articles on anthropolgy.
Posted by tc allen at 12:03 PM No comments: