Many people mistakenly believe that all Africans are Negroes except the late arriving Aryans of southern Africa. A result of this misconception has resulted in the claim that Negroes created the ancient civilization of Egypt. The people who created the ancient Egyptian civilization were the Mizraim, an Aryan nation, who arrived in Egypt around 3200 B.C.
Five of the six races, species, of humans inhabit Africa. They are the Khoisan (Homo khoisanii), Negro (Homo niger), Melanochroi (Homo brunus), Aryan (Homo albus), and Turanian (Homo luridus). The Khoisans are the original inhabitants of Africa; they originated in Africa probably around 75,000 years ago. Next came the Negroes, who appear in Africa between 55,000 and 40,000 years ago. Following them were the Melanochroi, who arrived around 35,000 years ago. Next came the Aryans, who probably began arriving around 7500 B.C. with more substantial numbers arriving shortly after 1500 B.C. These later Aryans are the ancestor of most Aryans of North Africa. Finally came the Turanians, who landed in Madagascar starting in the first century A.D. with substantial settlements by 1100 A.D. Most Madagascan Turanians are from these settlers.
The following map, which is based on Carleton Coon’s map,[1] shows the approximate areas inhabited by Khoisans, Negroes, Melanochroi, Aryans, and Turanians around 1500 A.D. During the last 500 years, the major changes that have occurred has been the area inhabited by the Khoisans has greatly contracted as Negroes encroached from the north and Aryans from the south. Also, large numbers of Melanochroi from British India were imported into the British colonies of East and South Africa. Along with a significant number of these later Aryans, a significant number of these Melanochroi still inhabit South Africa. 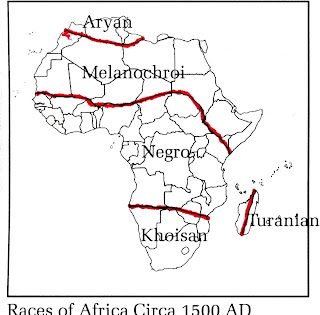 The Negro is the primary human species inhabiting Africa. The racial types of Negroes found in Africa are Sudanese (True Negroes, Nigritians), Palaenegroes (Forest Negroes), Pygmies (Negrillos, Twides), Nilotes (Nilotic Negroes), Nilo-Hamites (Negro-Hamites), Bantus (Kaffirs), and Negro Malagasy.
Sudanese are found predominately along the Guinea coast of West Africa from Senegal to Cameroons. They are a principal type in the countries along the Guinea coast from Gambia to Cameroons, and in southern Mali and Burkina Faso (Upper Volta). Included among the Sudanese are the Ashanti, Felup, Hausa, Ibo, Krus, Mandingo (Malinke, Bambara, Dyula, Kassonke, Soninke, (Jallonke), Mossi, Sara, Serer, Songhai, Toucouleur (Tacuror), and Wolof.
Palaenegroes live in the interior forests of west and central Africa. Included among the Palaenegroes are the Balunda and Batoka.
Pygmies are found predominately in the equatorial forests of Africa. They live in Cameroon, Central African Republic, Congo, Zaire, Rwanda, Burundi, and Zambia, but are only a minor part of the populations of these countries. Included among the Pygmies are the Bambutis, Batwa, and Babinga.
Bantus are found predominately in central and southern Africa. They are a principal type in Zaire, Zambia, Angola, Tanzania, Mozambique, Zimbabwe, South Africa, and other countries of southern Africa. They are also found in Uganda, Kenya, Cameroon, and Gabon. Included among the Bantus are the Eastern Bantu (Buganda, Bunyoro, Chaga, Karagwe, Kikuju, Luyia, and Rwanda Rundi), the Western Bantu (Bassa, Bemba, Duala, Fang [Pangwe], Kuba, Luba, Lunda, Mbala, Soko, Songo-Meno, Teke, and Tetela), and the Southern Bantu (Herero, Ndebele [Tebele], Shona, Shoto, Tsonga, Tswana, and Zulu).
Nilotes are found predominately in the upper Nile valley and adjacent lands from Khartoum to Lake Kioga and the northeast shores of Lake Victoria. They are a principal type in eastern Sudan and much of Uganda. Included among the Nilotes are the Abaka, Abukaya, Anuak, Beir, Belanda, Dinka, Jaluo, Kamasia (El Tuken), Latuka, Lendu, Luba, Madi, Mittu, Moru, Nuer, Shilluk, and Wira.
Nilo-Hamites are found predominately in east and east central Africa. They are a principal part of the population of Kenya, Uganda, and northen Tanzania. Included among the Nilo-Hamites are the Lotuko, Lumbwa, Kipsigis, Masai, Nandi, Suk, Teso, Toposa, and Turkana.
Negro Malagasy are found predominately in Madagascar and account for a majority of the island’s population. They include the Antankarana, Antandroy, Bara, Betsileo, Betsimisaraka, Sihanaka, and Mahafaly).
Tables 1 and 2 describe six racial types of Negroes: Sudanese, Negro Malagasy, Bantu,Nilote, Nilo-Hamite, and Palaenegro. Excluded is a description of the pygmy[2]. 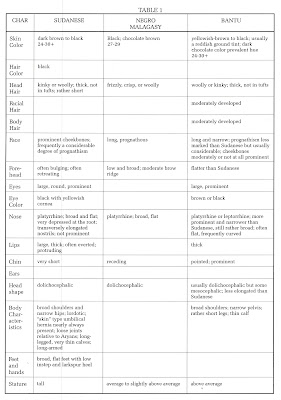 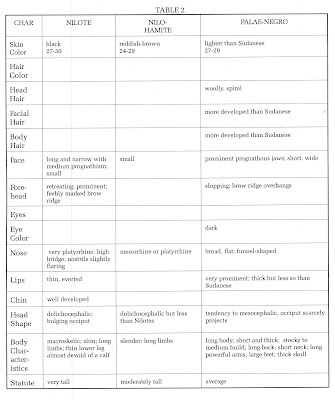 Next to the Negro in importance is the Melanochroi.  Three racial types of Melanochroi are found in Africa; they are the Saharan-Hamites (Moors, Saharan-Berbers), Eastern-Hamites (Ethiopians), and Egyptians.
The Saharan-Hamites are predominately found in and around the Sahara Desert. They are a principal type in central and southern Morocco, central and southern Algeria, Mauritania, northern Mali, Niger, northern Chad, and southern and central Libya. Included among the Saharan-Hamites are the Bale, Fulas, Mangbattus of Chad, Niam-Niam (Zandeh) of Chad, Shluh of Morocco, Tibbus (Tedas) in the Fezzan, Tibesti, and Tuaregs of the Sahara.
Eastern-Hamites are predominantly found in the countries between Egypt and Kenya and east of the Nile River. They are a principal type in eastern Sudan, Eritrea, Ethiopia, and Somalia. Included among the Eastern-Hamites are the Agau, Amhara, Barabra (Nubians), Bejas, Beni-Amer, Berberine, Bilins, Bisharin, Bogos, Danakil (Afar), Ethiopians, Falasha (black Jews), Gallas, Hadendoas, Kafacitos, Saho, Sidamo, Somali, and Wata.
Egyptians are found predominately in Egypt where they are a principal type. They include the Fellahins.
Table 3 describes three racial types of Melanochroi found in Africa. They are the Saharan-Hamite, Eastern-Hamite, and Egyptian. 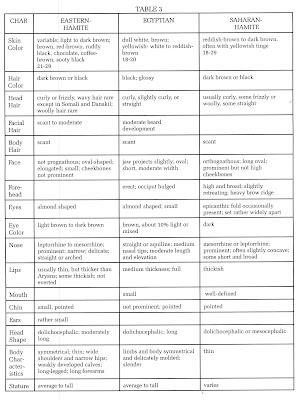 In the Maghreb is the Aryan racial type Southern Mediterranean. Southern Mediterraneans are predominately found in Morocco and Algeria from the southern slopes of the Atlas Mountains northward to the Mediterranean. They include the Berbers of Tunisia and Cyrenaica, sedentary tribes of Jebel Nefuse of Libya, the Kabyle, Mzab, and Shawia of Algeria, and the Riffian of Morocco. Except for recent arrivals in South Africa, they are the only type of Aryan  commonly found in Africa. Recent arrivals from to South Africa are primarily from the Netherlands and Great Britain.
In Madagascar is the Turanian racial type Malayan Malagasy. Malayan Malagasy are found mainly in Madagascar on the central Imerina Plateau. They make up less than a third of the island's population.
The Khoisan is the least populous human species inhabiting Africa. They include the San (Bushmen), Khoi (Hottentots), Sandawe, and Hatsa (Kindiga). The Sans and Khoi are found primarily in Namibia,  Botswana, and southern Angola. The Sandawe and Hatsa live in Tanzania. Khoisans are also found in South Africa in the form of the hybrid coloureds. Except for the coloureds of South Africa, Khoisans are a minor to insignificant part of the populations in the countries where they are found.
Table 4 describes the Southern Mediterranean, Malagasy, and Khoisan. 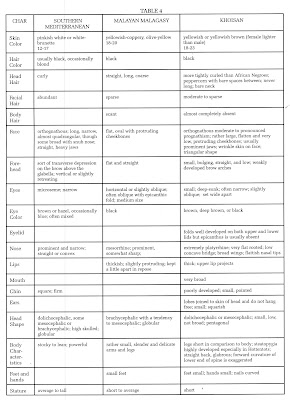 Haddon, A. C. The Races of Man and Their Distribution. New York, New York: The Macmillian Company, 1925.

2.  A description of the Pygmy is found in Species of Men: A Polygenetic Hypothesis by Thomas Allen, pp. 101-103.

More articles on anthropology.
Posted by tc allen at 10:34 AM