[Editor's note: Footnotes and references in the original are omitted.]
The Indo-Australian consists of four branches: Asian, Oceanic, Australian, and American.
Pre-Dravidians and Ainus (Paleoasiatics) make up the Asian branch.
Pre-Dravidians are found predominately in India with lesser numbers in Sri Lanka, Indonesia, and Malaya. They include the Veddas of Sri Lanka; Bhils, Gondi,  and Khonds (Kandh) of north and central India; Bihors, Kolarians, and Oraons (Kurukh) of Chota Nagpur; Paniyan, Kadars, Uralis, Irulas, and Kurumbas of southern India; Toala of Celebes; and Che Wong of Pahang province in Malaysia. Pre-Dravidians account for only a small part of the population of the countries in which they are found. However, Pre-Dravidians account for a large part of the Indo-Austrian population.
Ainu are predominately found on Hokkaido Island, Kuril Islands, and Sakhalin Island. They are a principal type in northern Hokkaido Island and southern Sakhalin Island.
The Australian branch contains the Australian, Murrayian, and Carpentarian types. They are found in Australia. This branch comprises only a small part of the population of Australia. Murrayians inhabit south east Australia, and Carpentarians inhabit north and central Australia.
The Oceanic branch consists of Negritos (Oceanic Pygmies), Melanesians, and Papuans.
Negritos are found in small numbers on the Andaman Islands, Malay Peninsula, Sumatra, Philippine Islands, and New Guinea. They include the Aetas of the Philippines; Mantra, Saoch, Semang and Senoi (Sakai) of Malay Peninsula and east Sumatra; Tapiro of New Guinea; Andamanese (Mincopies) of the Andaman Islands; and Shompen of the Nicobar Isles.
Melanesians are found predominately along the coast of New Guinea and in the Melanesian Islands (Admiralty Islands to New Caledonia and Fiji). Except in Fiji where Melanochroi from India are now in the majority, Melanesians are generally a majority of the populations of the Pelew Islands, New Ireland, Solomon, New Britain and other islands of the Bismark Archipelago, New Hebrides, New Caladenia, and Loyalty Islands.
Papuans are the predominant population of New Guinea. They are also found in Aru, Flores, Solor, Adonara, Lomblen, Pantar, and Alor Islands of Indonesia.
Fuegians make up the American branch. They are found in Tierra del Fuego, along the Pacific coast of Chile, in Columbia, along the Atlantic coast of Brazil and in northern California. They consist of Yaghan (Yamana) and Alakaluf of Tierra del Fuego; Botocudos (Aimoré, Aymore) of Brazil; Chono of Columbia; and Piaroa, Goajiro, and Motilon of Colombia.
Before 1500 A.D. Indo-Australians inhabited parts of India, Sakhalin, and Hokkaido Islands, New Guinea, Melanesian Islands, Fiji, and all of Australia. Since then they have lost most of Australia to the Aryans. In Japan and Siberia, the Japanese, Russians, and Turanians of Siberia are pushing them to extinction. Although they still dominate New Guinea and many of the surrounding islands, they are losing Fiji to Melanochroi immigrants. Also, approaching extinction is the American branch.
The general physical characteristics of the Indo-Australian follow. Most of the information below and in Tables 1, 2, and 3 come from the works of Bean, Brinton, Comas, Coon, Deniker, Haddon, Hooten, Keane, and Nesturkh with minor input from various other sources.
Skin Color: dark brown, chocolate brown, nearly black
Hair Color: usually black
Head Hair: wavy, curly, or frizzy; some nearly straight
Facial Hair: variable, often strongly developed, some sparse
Body Hair: variable, often well developed, some sparse
Face: narrow and low; jaw project (prognathism); prominent cheeks; concave temples
Forehead: somewhat sloping with strongly developed supra-orbital (brow) ridge
Eyes: deep set, round
Eye Color: dark hazel, brown, dark brown
Nose: usually platyrrhine; short and broad; big with a low or medium bridge; very wide nostrils; bulbous tip; depressed at base
Lips: thick, full
Teeth: megadont; large
Chin: poorly developed
Head Shape: usually dolichocephalic, some mesocephalic
Body Characteristics: ectomorphy; similar to Aryans with longer and thinner limbs; elongated forearms and legs; skin when cut tends to form prominent, elevated sores or keloids
Stature: short or average
Table 1 describes the characteristics of the American branch (Fuegian) and Asian branches (Pre-Dravidian and Ainu). The characteristics of the Australian branch (Australian, Murrayian, Carpentarian) are described in Table 2. Table 3 describes the characteristics of the Oceanic branch (Melanesian, Papuan, and Negrito). 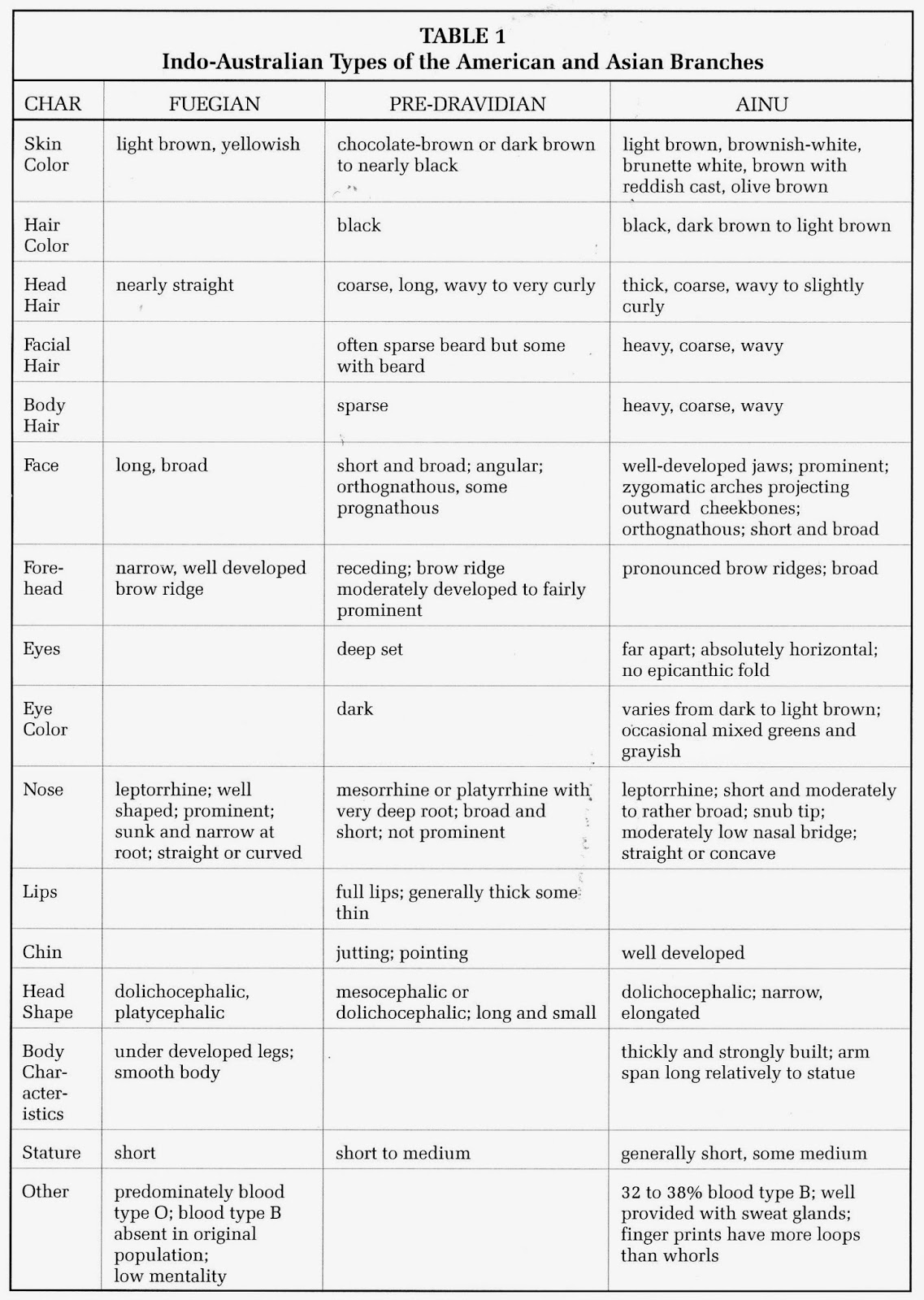 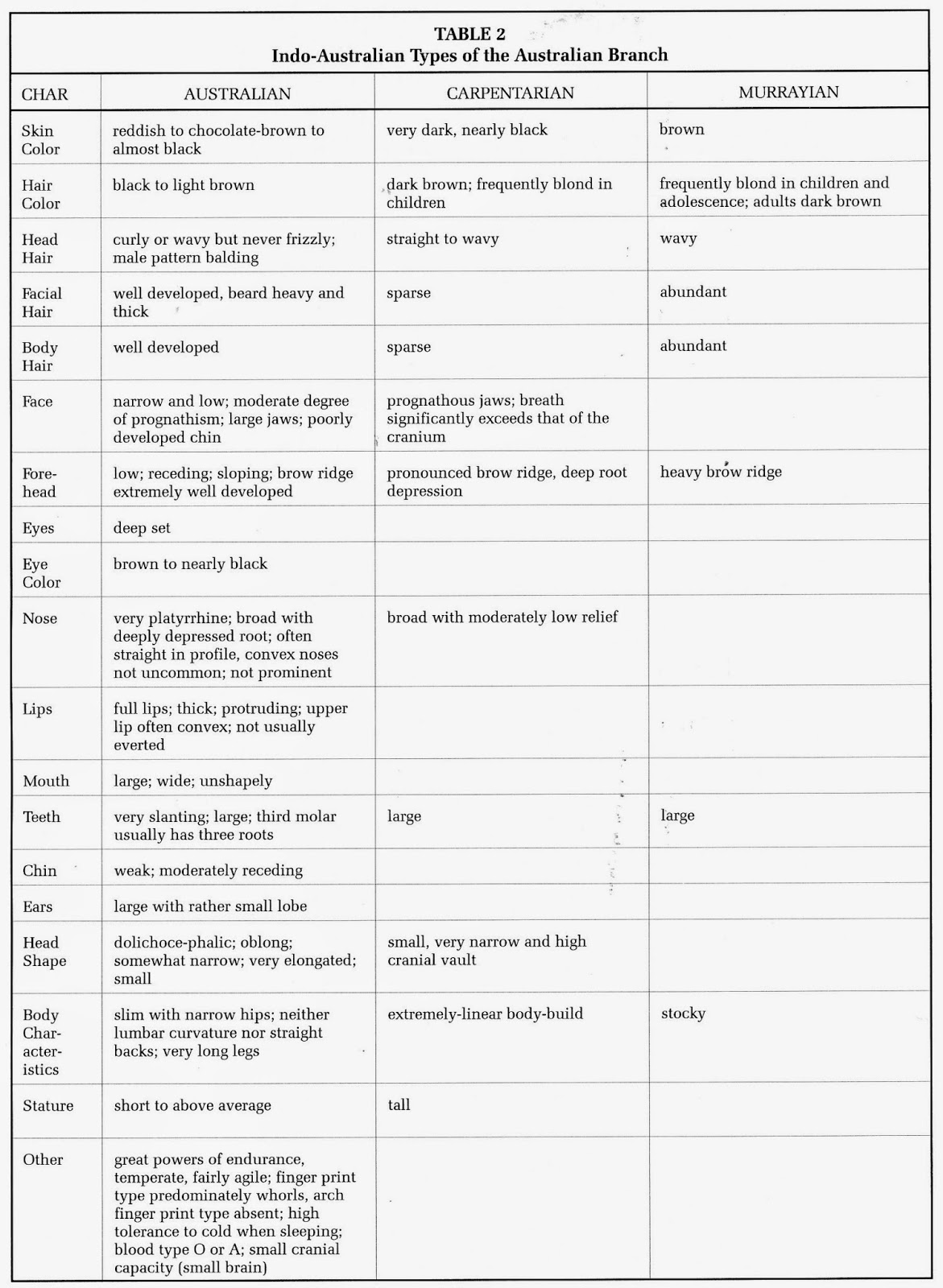 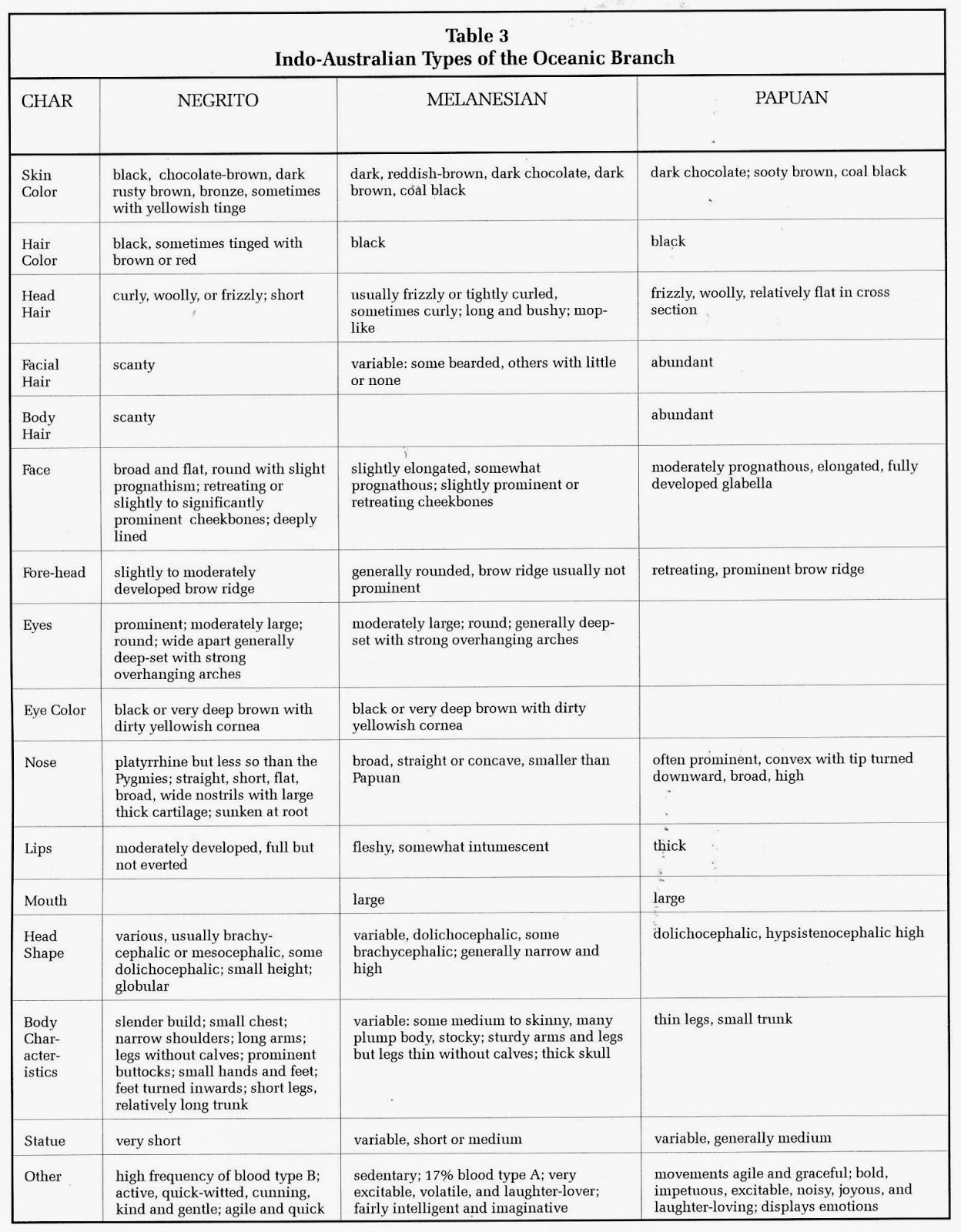 More articles on anthropolgy.
Posted by tc allen at 4:58 AM